The App Factor Will Drive QR Code Scans Into The Future 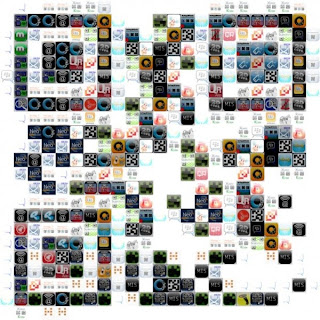 image via QRarts
While the mobile web continues to grow at a staggering rate, and web-enabled smartphone devices steadily speed up, the mobile tagging world is organically growing into a beast. From the outside, the segment looks splintered to many. Proprietary 2-D codes, 1D UPC codes, open QR codes, app readers, content offerings, direct vs. indirect, micro sites and analytics all dominate discussions amongst advertisers looking to incorporate mobile web content and offerings via mobile codes into their print. Everyone is looking for ONE standard 2-D code or ONE standard app for 2-D codes, but in a world of over a half million apps, is that even practical? People are scanning! The more apps scanning codes the better, this will only breed innovation. Here’s my take.
QR Code mobile apps can dramatically drive QR code scans and increase the code's connotative value by offering rewards and incentives to app users who scan codes, encouraging them to be more active with their scanning habits. This can increase the value of the code outside of the original ad offering. If this concept can be accepted enough it will help the entire industry. This is how multiple winners can emerge (code, apps, brand, user). You heard it here first! There is a real opportunity to add a NEW layer of value to the QR code scanning transaction that NOBODY in 2-D barcode land has exposed, YET….Leave it to the Captain of The QR Code Galaxy, yours truly.

To this day, out of all 2-D and QR code reader apps, NOT ONE is offering anything other than simple scanning function to drive user scans. By that I mean, QR code reader apps have a sole function to scan QR codes and track scan history, that’s about it. With the exception of certain sharing features, apps haven’t participated in the “scan value” much at all. Up to this point, everything has hinged on the advertiser to deliver. Some have succeeded, lots have failed.
Stickybits and Shopkick have introduced an early model that rewards users for scanning specific product 1D UPC codes. This is part of a larger location based shopping app. The promotions encourage scans by offering rewards via credits as currency (i.e. kick bucks) and notify users of new scan promotions, often offering special incentives to scan certain products.
The same model can naturally transfer over to the 2-D code world. The next “killer” app to scan QR codes in the future will be offering “killer” incentives to scan codes in the wild. Get it? Also, this will allow many co-existing scan apps and 2-D codes because of the mass niche universe we live in. Again, 500,000 apps we’re talking about. The QR code and content that’s behind the code will still carry the same weight but there will be an X factor driving the scan coming from a variety of different apps. Imagine receiving an email from a QR code reader app telling you the month’s different magazines to pick up and scan ads within to redeem app rewards, not to mention what the advertiser is actually offering. It’s this kind of collaboration that will fly. The success of levels and badges like Foursquare and Stickybits have incorporated should be an indicator to QR code readers that people like to be acknowledged for usage.  Incorporating these types of incentives into QR code scanning can only help everyone by adding another dimension of value to the QR code scanning experience with your mobile smartphone.
The market may seem fractured to many but recently it has become crystal clear to me. I believe it’s meant to be fractured, for innovation purposes, it needs to be. I believe there WILL be multiple types of adopted mainstream 2-D barcodes and hundreds of apps that scan them, as well as other emerging technologies, to transmit physical to digital value via the mobile web and encourage advertising engagements. So why wouldn't we see an NFC (RFID) advertisement poster with image recognition, augmented reality, QR codes AND Microsoft TAG.. all on the SAME poster?? This space is going to be THAT huge! Due to its openness, the QR code itself will be universally recognized, but consumers WILL be able to decipher them from other proprietary 2-D codes, associating 3rd party value by the app they use to scan. The evolution of the QR code reader app will not only drive scanning dramatically by offering incentives and rewards, it will also drive overall mobile web usage as an everyday part of our lives. There are over 70 apps that scan QR codes but pretty much all of them lack identity, they lack a cool factor that delivers value on its own. After this, I’m sure a few can rise to the challenge.