Tappinn is pumped to announce that maps have been officially added to the analytics! Each QR code scan on Tappinn is currently tracked by geo location and members can now view a cluster map of scans for each QR code and zoom to see engagement details and pages viewed. Pure awesome. Big shout out to Kevin Galbavi (CTO) and Schuyler Bos on this, Tappinn wizzards!

See the full gallery on Posterous

See the full gallery on Posterous
Posted by Nick Ford at 5:47 AM 1 comment:

It is our mission to give 110% when it comes to helping our members. We are proud to make this a fundamental part of our business philosophy. It's nice to receive some positive feedback and appreciation! Below is a quote from a member recognizing our efforts. Happy Friday!

"I recently became a member of the Tappinn Platform which has been extremely useful to our company. Learning how to implement the QR codes has been a challenge but with the help with the help of your customer service staff it has helped me tremendously. I am writing to inform you of the great quality of customer service I've received from Parisa and Sandra. They have been helpful in every way, great energy, positive attitude and overall wonderful to speak to. I wanted to take the time out to acknowledge their efficient response time, product knowledge, and training efforts. They are truly an asset to your organization and one of the best customer service experiences I have ever witnessed."

User submission forms or "sign ups" from mobile tagging are a way to capture user information while allowing a response transaction from the brand by offering a mobile coupon or an exclusive discount in return. This exchange can take 10 seconds and deliver value to both parties. Below are a couple examples of how to utilize these sign up forms within your mobile tagging efforts. Check em out!

Alles Tire is using a submission form within their mobile page that allows users to submit their name and email in exchange for a coupon from Alles Tire for a $9.95 oil and filter change. Both Alles Tire and the user who scans will get something.  Below is a link to the example by Alles Tire.

Another way to incorporate forms is by allowing sign up for catalog requests or to “opt-in” to a newsletter. Raymond Weil (Swiss watch brand) has included a sign up within their mobile tagging website that allows users to fill out their name and address to receive a catalog in the mail and get included on their email newsletter. Raymond Weil gets to increase their mailing list while users receive a new catalog of hot watch deigns in the mail. Click the link to see Raymond Weil catalog request mobile page.

Getting scanners to sign up for news and events is a fantastic way to kick start your mobile tagging site. Use the examples above as inspiration. Give users something valuable enough in return and they will be willing to give up their info and opt-in to get it.

Below are enhanced screen shots from the platform as a step by step visualization of how to build user submission forms on Tappinn.

See the full gallery on Posterous
Posted by Nick Ford at 3:40 PM 1 comment:

Tappinn University is an online learning center dedicated to boost subscriber’s platform IQ. The tools provided in Tappinn University give members in-depth visuals and instructions on how to use Tappinn, as well as highlight specific campaign examples that members can study to become experts. Effective mobile tagging starts with experience and inspiration. These learning materials were developed from our own insights using the platform and are intended to give subscribers a huge advantage. Tappinn University provides all of the tools necessary for Brands and Concierges to inject successful mobile tagging media into their traditional advertising. Study hard, pupils!

Wow! This is an amazing video. Tesco creates a virtual store at a subway station in South Korea where shoppers can browse naked displays with pictures of products and purchase them by scanning the QR code on the display.

Tappinn Webinars - How to use the platform.

Tappinn hosts two webinars a week to help members get the most out of the platform, but anyone can tune in! The webinars are Tuesday mornings and Thursday afternoons.  Below are links to the webinars for the end of June and July.

#QRchat is a Twitter hashtag that is being used in conversations about QR code media strategy. Every Sunday night at 8:00 est. discussions about new ways to engage consumers with QR codes are taking place on Twitter. The forum is hosted by Stephanie True Moss and QRmedia.us. Anyone can join in by tuning into a Twitter search of #QRchat next Sunday. Tappinn made the QR code below as a way to showcase mobile Twitter embedding and also to celebrate a terrific concept on by QRmedia.us. We were having some page display issues with an Iphone 3Gs so please scan it and let us know how the page looks!

Tappinn's Dashboard Gets a Face Lift!

The best mobile tagging website builder and QR code manager on the web. 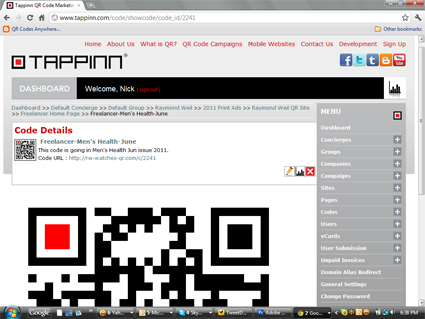 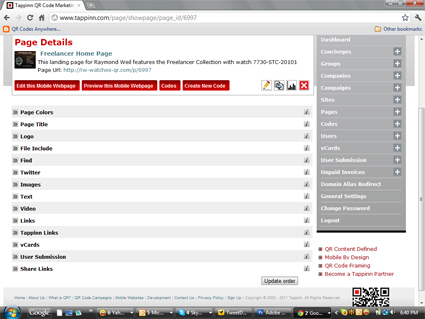 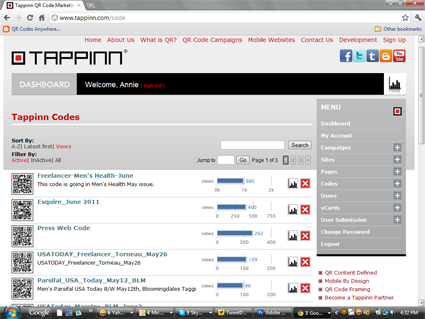 This is a birthday card sent out by Miners North Jewelers in Traverse City, MI. Great way to utilize the birthday context with customers by connecting them with a unique message. Scan the QR code for an awesome example! Built on Tappinn 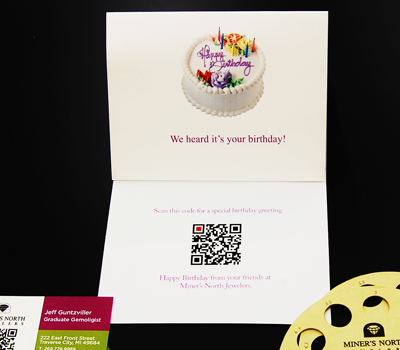 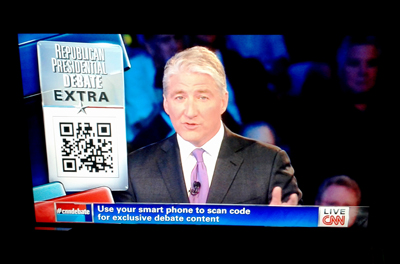 The CNN Republican Presidential Debate was loaded with social and mobile goodies last night. QR Codes were flashed (long enough to scan!) throughout the debate boasting exclusive mobile content for viewers. This was a fantastic use of mobile tagging on TV and a good sign for TV networks that are getting familiar with how to display QR codes. The 'exclusive" mobile content was nothing special but it didn't suck, because it was mobile and relevant, which is a step in the right direction for QR codes being seen on TV in the future. The debate was also being discussed heavily on Twitter including the hash tag #cnndebate which was also prominent in the corner of the screen throughout the debate. CNN does a great job of incorporating Twitter discussions into their programming. This upcoming election will no doubt be one of a kind and mobile will play a big role. Tappinn unveils a dynamic new page element to its mobile site builder and it's now available to all subscribers! Tappinn members can stream Twitter profiles and searches within their mobile tagging pages.  There are a lot of possibilities to add value to your QR connected mobile pages by streaming real time updates and "live" commenting to users.

The Twitter element is simple to inject on pages. There are three quick steps to follow in your page details menu to add this to your QR code campaign on Tappinn.
Step 1: Select your "Feed Type." This can be either a Twitter account (i.e.DanicaPatrick) or a search term (i.e. #Nascar).
Step 2: Enter the account name or search term that you wish to stream.
Step 3: Choose the number of tweet post that will be visible on the Tappinn page. Below is a screen shot of the platform.
Submit your Twitter feed to the mobile page and voila!

If you have any questions you can email our support team to guide you through this process at preenders@tappinn.com.
Posted by Nick Ford at 1:38 PM 1 comment:

Scan a QR Code, Get a Free Beer in NYC!

Heartland Brewery, a restaurant and brewery with locations in Manhattan, is running a mobile web coupon promotion with Tappinn QR codes to entice New Yorkers to come in and cool off with a free mug of Summertime Apricot Ale. The artwork below will be posted on gigantic kiosks in New York City's famed Union Square district and the QR code coupon will be valid through June 15th. Users who scan the QR code can present their screen to the Heartland Brewery wait staff at the Union Square location and receive a free Apricot Ale. This is an example of a QR code campaign that every restaurant and brew house should be running with their print advertising. Tappinn.com makes is simple, trackable and fun! Cheers! 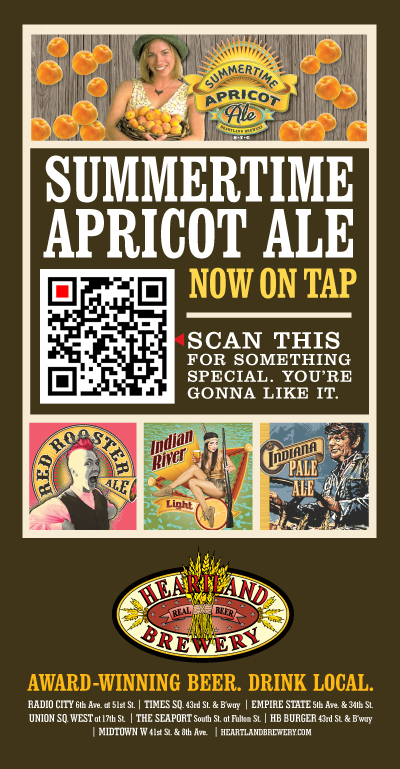