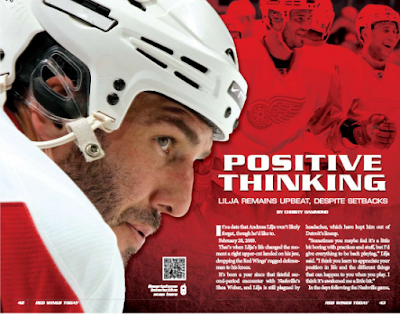 WHAT! They didn't call me!? Being a Michigan native, I assumed that I would be the first to know about any decisions made about QR Codes by the Red Wings. Lol.
The Detroit Red Wings have stepped into a new light in my eyes. They become the FIRST professional US sports team to use QR codes. The code is featured in their game program and leads users to a video posted below corresponding with the page. The COOL thing about launching something like this in a sports arena is the ability to get everyone's attention. The Red Wings did just by broadcasting an instructional video about QR codes on the big screen. I LOVE it. That's the type of support QR codes need to get rolling.
I'm pretty pumped about the step forward in the QR world BUT let's look at what the Red Wings should have done. My questions is, where's the friggin CONTENT?
The QR code directs users this video, THAT'S IT. According to Nicole Yellan, the Red Wings social network director, there are many more videos to follow. She seemed quite happy with the performance of video media in this type of atmosphere sighting a statisitc that I didn't understand. I'm just thinking about how I would even be able to HEAR in a noisy arena atmosphere to enjoy the video on my Iphone.
The Red Wings SHOULD have created a Smart Site with the video links being just ONE element. They could've included exclusive content about players w/stats and locker room photos, each one being sharable on social networks. NOW we're talking! This could've been executed easily through Tappinn's Smart Site Platform. Not only that, the tracking analytics associated with each page would help the Red Wings make future decisions in the mobile space based on performance.
My only hope is that the Red Wings consider putting together they're next QR code campaign on Tappinn. Think 2010 is off to a rockin start for QR codes. You ain't seen nothin....
Posted by Nick Ford at 5:03 AM